Why is Marijuana Illegal? A Look at the History of MJ in America

Cannabis was at one point freely cultivated and used in the U.S. What happened? Here we take a look at the history of marijuana law in America.

After decades of cannabis prohibition in the United States, it may be hard to imagine that for the majority of the nation’s history, cannabis was widely accepted and used for medicinal purposes.

Up until the twentieth century, cannabis was freely cultivated and used to produce medications, rope, and textiles.

So what happened? Why did marijuana become illegal and criminalized?

Most people assume that cannabis was made illegal through a process involving scientific, medical, and government hearings that concluded prohibition was best to protect citizens. The reality, however, is a different story.

In the midst of these changing social attitudes and state laws, it’s worth looking into what brought about American marijuana prohibition in the first place.

Cannabis, thought to be among the first-ever domesticated crops, has a long history in America. The cultivation and production of marijuana and hemp was encouraged throughout the early colonies, before they were formally the United States.

In 1619, King James I announced The Virginia Company decree, which ordered every colonist to cultivate 100 help plants for export to England¹. Hemp was even exchanged as legal tender in Pennsylvania, Virginia, and Maryland.

Domestic cannabis production continued to flourish up through the Civil War, when it was used to produce rope and fabric. Also during this time, hemp and marijuana were embraced for their medicinal properties:

“By the late 18th century, early editions of American medical journals recommend hemp seeds and roots for the treatment of inflamed skin, incontinence and venereal disease,” write Patrick Stack and Claire Suddath of TIME Magazine. “Irish doctor William O’Shaughnessy first popularized marijuana’s medical use in England and America… He found marijuana eased the pain of rheumatism and was helpful against discomfort and nausea in cases of rabies, cholera, and tetanus⁸.”

Studies demonstrating cannabis as holding therapeutic potential continued into the 19th century. French doctor and scientist Jacques-Joseph Moreau’s discovered that marijuana was effective at suppressing headaches, increasing appetite, and supporting sleep, and his findings were published in journals like the American Journal of Psychiatry⁹.

In the 1850s, marijuana was medically prepared and made available through public American pharmacies³. It was listed in the United States Dispensatory, an official authority for prescription and over the counter medicines, as a treatment for conditions like improving appetite, sexual interest, mental disorders, gout, cholera, hydrophobia, and insomnia⁶. In the nineteenth and early twentieth centuries, cannabis in liquid form and as hashish was freely available to purchase at drug stores.

Attitudes regarding marijuana started to shift in the early 1900’s following the Mexican Revolution, as the subsequent hefty influx of Mexican immigrants into the U.S.. Mexican immigrants came to Texas and Louisiana and brought with them their cultural tradition of smoking marijuana leaf in cigarettes and pipes for medicinal purposes2.

Americans at the time were only abreast with cannabis in the form of oil or hashish, which they took orally². Plus, Mexicans called their cannabis “marihuana,” a term unfamiliar to Americans¹.

Unhappy with the inbound flow of immigrants, the U.S. media, including newspaper mogul William Randolph Hearst, began to falsely spread claims that Mexican immigrants were being disruptive, behaviors they attributed to their ‘marihuana’ use¹. Cannabis began to be vilified.

There were congressional hearings regarding marijuana law in the 1930s, with some lawmakers looking to control Mexican immigration deceitfully by falsely claiming that marijuana would cause men of color to be violent against white women. The head of the Federal Bureau of Narcotics (FBN), Harry J. Anslinger, argued that the exposure to marijuana was causing an increase in marijuana smoking among reports of middle-class people.

President Franklin D. Roosevelt, who encouraged the adoption of cannabis restrictions, supported Anslinger’s argument. Despite being opposed by the American Medical Association who argued in support of the therapeutic benefits of marijuana, Congress passed the Marijuana Tax Act in 1937. The act called for a tax equaling roughly one dollar on anyone who dealt commercially in cannabis while implementing penalties and enforcement provisions to cannabis handlers⁷.

Some historians believe that the efforts to pass the Marijuana Tax Act of 1937 were spearheaded by Hearst, Andrew Mellon, and the Du Pont family, who saw the hemp industry as a monetary threat⁶. According to authors and historians Laurence French and Magdaleno Manzanárez, hemp – a sustainable and versatile crop with over 24,000 product applications — was becoming a cheaper substitute for wood pulp used to print newspapers, and Hearst and the others who had lumber and paper holdings were looking to destroy the competition⁶.

Hearst launched an aggressive crusade against marijuana through his newspapers and magazines, which regularly published sensational stories about the threat of marijuana and the life-threatening plight of those who used the drug².

Following America’s entry into World War II, cannabis production was ignited in the US once again. Imports of hemp that were needed to produce parachutes, marine cordage, and other military necessities had become scarce, so the Department of Agriculture distributed seeds and encouraged American farmers to plant hemp in its “Hemp for Victory” campaign³. 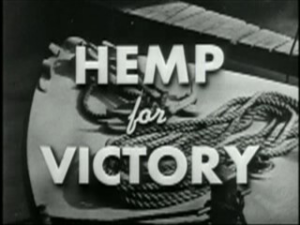 But fears of cannabis returned in the mid 1960s when reports found that marijuana use was up in youth and college students. The media and news outlets pushed the so-called campus drug epidemic².

Richard Nixon, during his 1968 presidential campaign, promised to restore “law and order” to America. Upon being elected, he declared a War Against Drug Abuse². Under Nixon’s presidency, the federal government passed the 1970 Controlled Substances Act, which classified drugs on four different schedules. The federal act classified cannabis as a Schedule 1 drug, causing it to be considered one of the most dangerous substances that carry the highest penalty.

The Controlled Substances Act unfortunately lumped all cannabis together, failing to recognize the differences between marijuana and hemp. The act, which makes cannabis illegal under federal law, is still in place today.

The 1990s were monumental for cannabis policy in the U.S., thanks to the efforts of marijuana researchers.

Early in this decade researchers made notable breakthroughs, expanding our current understanding on cannabis. Specifically, they learned how the compounds inside cannabis, cannabinoids, interact with a part of our body called the endocannabinoid system, a complex signaling network that is responsible for performing different tasks in an effort to maintain homeostasis.

Scientists also were able to identify the endocannabinoid system’s main cannabinoid receptors, CB₁ and CB₂, present in the nervous system and immune system10. When stimulated, these cannabinoid receptors trigger a variety of physiological processes by altering the release of neurotransmitters in an effort to keep systems in balance. These beneficial effects include, but are not restricted to, controlling inflammation, limiting cell damage, and reducing pain11.

With these scientific breakthroughs came greater support to make cannabis accessible for those in medical need. While cannabis remained federally illegal under the Controlled Substances Act, in 1996 California became the first state to establish medical marijuana legislation, offering a legal cannabis option for the first time in decades.

Arizona followed with its own medical marijuana legislation later that year. Before the decade finished, Alaska, Oregon, Washington, and Maine had each passed laws permitting the use of marijuana for medical purposes.

Since the first statewide medical marijuana laws went into effect, the number of states adopting cannabis legislation has been steadily growing.

Support for marijuana legalization in the U.S. among voters is now at an all-time high, with a recent poll finding that 60 percent believe adult use marijuana should be legalized and 93 percent support the legalization of medical marijuana.

The growing social acceptance of marijuana and the greater recognition of its medical purposes has made an impact on cannabis policy throughout the U.S. The 2016 election was monumental for cannabis, as voters in eight states approved marijuana measures.

As of today, 33 states and Washington D.C. have passed laws legalizing the use of medical marijuana.

Additionally, a large majority of states have passed laws allowing for the cultivation of hemp. A provision within the 2014 federal Farm Bill gave permission for states to adopt statutes permitting universities and state departments of agriculture to grow hemp. The new law spurred hemp cultivation throughout the U.S., and more than 23,000 acres of hemp were grown in the U.S. in 2017, with Colorado leading the way in production. In 2018, hemp and hemp-derived products like CBD oil became legal for commercial production with the passage of the 2018 Farm Bill.

Today, more Americans understand and respect cannabis to naturally promote wellness thanks to recent groundbreaking discoveries by researchers. Read up what studies have found on cannabis’ potential benefits.

Because of changing public perceptions and grassroots efforts toward recreational and medical legalization, it looks like cannabis law in 2019 and beyond will continue to progress toward the end of federal prohibition.

Learn more about cannabis laws across the U.S. and keep up-to-date with the developing cannabis industry by following our news feed.

Colorado After Legalization: Statistics and What They Mean

The Bounceback for Cannabis Businesses

The cannabis industry faced an uphill battle in 2019, but developments suggest that it is…
Features Politics

Federal Marijuana Legalization: When Will it Happen?

When will marijuana be federally legal? Looking ahead, we examine what it will take to…
Read More Cannabis News